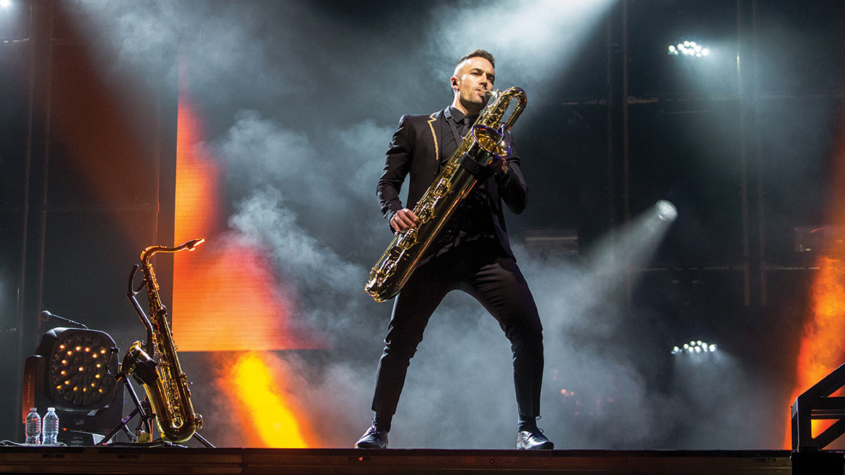 Gratitude is a recurring theme for saxophonist Jesse Molloy (’01). Whether the topic is music, bands or his education, Molloy said he wants to take the time to be thankful for the opportunities that have come his way.

“I have been trying to express my gratitude in different ways, whether it is through producing music or performing music,” he said. “Making music in service to others, not just myself, has opened my soul in many ways. The idea of getting out there and sharing what you do, that’s something that I have had with me since SOU.”

Molloy is a multi-talented musician, producer and composer. He is currently playing saxophone with the rock band, Panic! At the Disco. The band’s manager reached out to Molloy to put together the touring horn section for the group’s “Death of a Bachelor” album cycle.

The ensuing album was nominated for a Grammy for Best Rock Album in 2016. Molloy said that working with the band and touring with them was a childhood dream.

“I always wanted to play saxophone in a project like this,” he said. The band played venues all over the world, including Madison Square Garden in New York, where the concert was sold out. “It was unbelievable,” Molloy said. “I had to take a moment and just soak it in.”

But it’s more than playing to sold-out venues that catches Molloy’s attention. He is working with leading musicians and honing his craft each day.

“Working with this band has been one of the best experiences,” he said. “The guys are some of the most talented and coolest guys I have ever met, and I am so honored to be a part of it for a season.”

While Molloy is humble about his skills, talent and the many hard hours of work he puts into his music, he is reflective about his experience at SOU.

“I was really lucky, both with the people I met and with the teachers I had,” he said. “It seemed like all my classmates were passionate and always doing something. And all my teachers were the same. There’s a lot that shapes us in the environments we choose to stand in.”

Molloy said what surprised him about SOU was how much his teachers encouraged him to get off campus and perform.

“I was always in a band – ska, punk, jazz, funk, soul – you name it,” he said. “My professors, especially Rhett Bender, cheered me on the whole time. This encouragement was big for me.”

It ultimately would be Bender who was the thread between Molloy’s years at Ashland High School and his college years. Molloy started taking private lessons during his senior year of high school while Bender was on the SOU faculty.

“He was a big reason I went to SOU,” Molloy said. “I still have Rhett Bender’s voice in my head. He had this warm way of offering a critique while being encouraging at the same time.”

Bender’s influence remains with Molloy today, even while he is touring with one of the nation’s most popular bands.

“Rhett influenced just about every aspect of my playing, from the way I hold the saxophone to the way I approach practicing,” he said. “I’ve always been a little impatient with myself, but even now, I think of Rhett telling me to relax.”